Leadership empathy: Does anyone care?

Leadership Empathy: Does Anyone Care?

In this data discussion, we examine our latest findings around one of today’s most celebrated leadership skills — Empathy. In the past, leadership training focused on helping managers improve employee productivity to maximize profits, often without valuing those employees as individual human beings. More recently, organizations have begun to recognize the positive impact of empathetic leaders, from general business performance to employee well-being.

Google’s research on team effectiveness highlights the paradigm shift from employees as drones, to employees as people. They found that psychological safety—the ability for team members to take risks and be vulnerable in front of one another—is the single biggest predictor of a successful team. In other words, when leaders display empathy towards missteps instead of punishment, their teams are generally happier and more productive.

Given the importance of leadership empathy in the workplace, we are excited to explore how it manifests in our data.

We started by investigating gender differences regarding leadership empathy. Psychologists have consistently shown that women display more empathy than men, both in their actions, and at the neurological level.

One interpretation here is that women do not give themselves enough credit for their kindness. This may be because women are generally less confident and self-assured than men.

You can see these patterns in the graph below.

The error bars (the thin black lines that look like capital I’s) represent a 95% likelihood that the value (the big color bar) is really within that range. The fact that those error bars do not overlap in the coworker ratings indicates there is a significant difference between the scores of men and women, even when taking the margin of error into account. While the perception in our data that women are more empathetic than men is not surprising, it is always interesting to see “common knowledge” revealed through data.

Your Manager Needs Support Too

Perhaps less intuitively, we also found interesting patterns in empathy based on the relationship between the rater and the leader. You can see in the graph below, direct reports rate their managers as having much more empathy than managers perceive their direct reports to have. In other words, employees are getting the better end of the stick than their managers when it comes to feeling seen and understood.

We find this pattern holds, regardless of the leader’s position in the company. For instance, a VP would likely rate the CEO higher in empathy than the CEO would rate the VP. At the same time, the VP manages their own team and likely perceives their direct reports to be less empathetic than the direct reports perceive the VP to be. 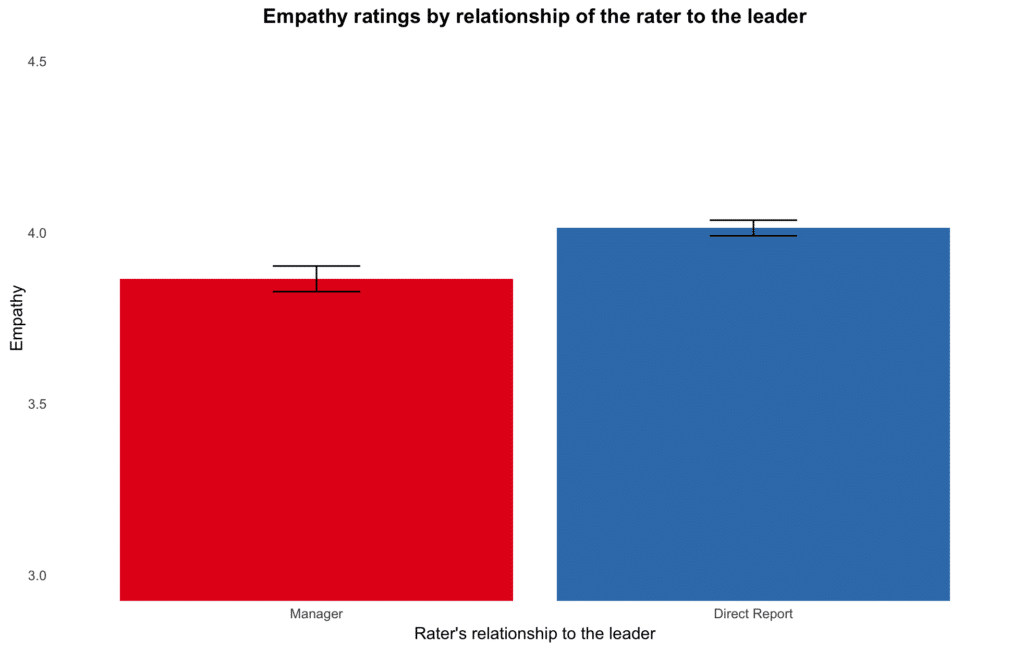 This could result in two people leaving an interaction feeling very differently about the level of empathy their counterpart displayed. From a manager’s perspective, it indicates the empathy they display does not feel reciprocated. What could account for this imbalance?

Managers are often the person employees approach with their dissatisfaction and complaints. A good manager will patiently listen and try to help their employees navigate and resolve their difficulties. At the same time, managers generally hold greater responsibilities and stressors than their direct reports. Thus an employee can leave a meeting feeling heard and understood while their manager feels underappreciated and walks away with additional weight after the interaction.

Alternatively, perhaps we see a manifestation of the power dynamic between these two people. Direct reports may be afraid to say their managers lack empathy, while managers tend to “call it as they see it.”

The Icy Perception of C-Level Sensitivity

The graph below shows different empathy ratings for leaders based on management levels. The rating data we just discussed lends some insight into these findings. For instance, notice how individual contributors—the blue bar—are rated among the lowest in empathy. This makes sense given that they do not have any direct reports to boost their empathy scores. 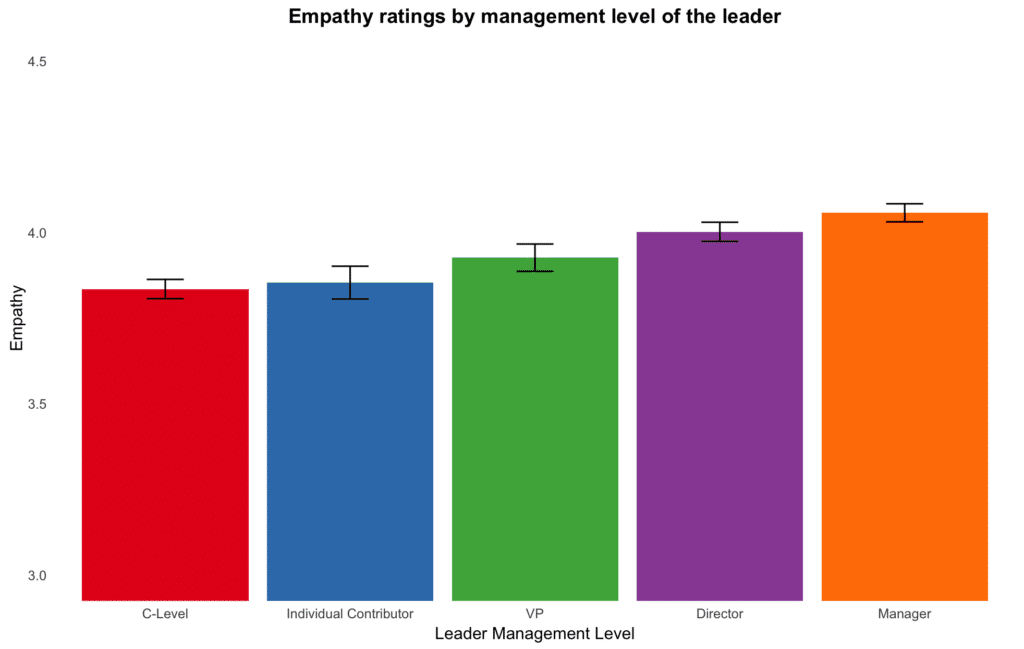 Another piece of the graph worth examining is the red bar on the left, representing empathy ratings for C-level executives. The cynical interpretation of this finding is that C-level executives don’t put in the effort to display empathy, simply because they don’t need to. The charitable interpretation is, C-level executives are focused on implementing broader, more visionary solutions and do not have time or energy to individually interact with employees in an overly empathetic way.

Yes, Empathy Can Be Learned

These rating discrepancies are certainly interesting and were worth spending time on, but the most exciting finding our analysis uncovers is that coaching improves empathy ratings! People believe they became significantly more empathetic between their first and second assessments. Coworkers also notice this improvement trend, as shown in the graph below. 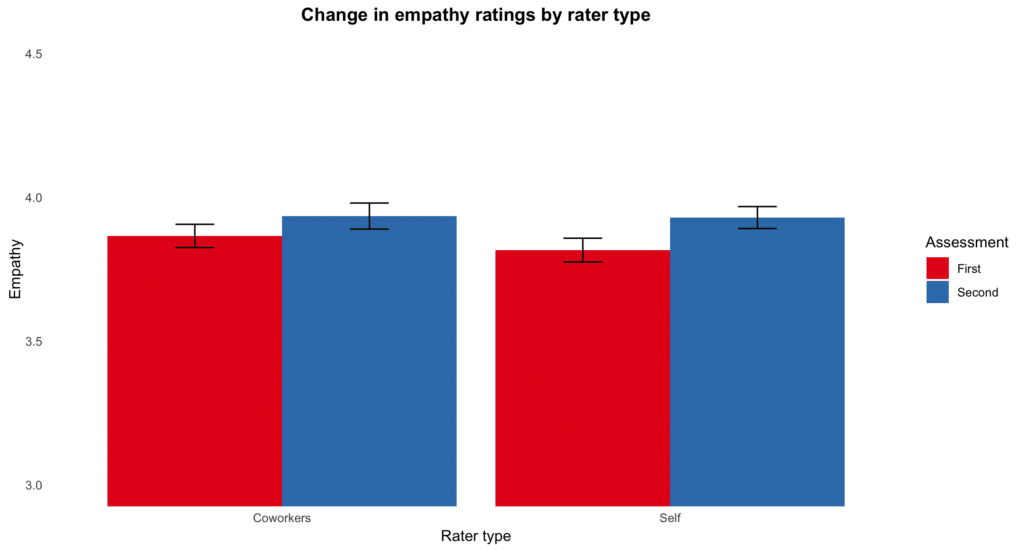 Leaders became noticeably more empathetic after receiving coaching. In even better news, this growth applies across the board; it is not restricted by factors like personality type, initial openness to coaching, or even how much the leader likes their coach.

Phew! That’s a lot of data for today. So, what do we want you to take away?

Learn how to become a more empathetic leader with the help of Torch. Request a demo below.

18 Leadership Books for Every Stage of Your Career eBook